Two pricks with 9-mms. My self-esteem is non-existent right now.

The Sopranos (1999-2007) is one of my favourite telly series. James Gandolfini as Anthony “Tony” Soprano led a cast of awesome actors playing interesting and believable characters in an organised crime set-up that guarantees drama, action, and dark humour. Combined with many innovative storytelling elements and a perfect score, this show could hardly have been any better.

There is relatively little shooting throughout, but most of those scenes are carefully choreographed and usually reasonably realistic. The shootout I want to discuss here in GURPS terms is a central scene in the first season, the attempted hit on “Tony” Soprano in The Sopranos #1.12. END_OF_DOCUMENT_TOKEN_TO_BE_REPLACED

Justified (2010-2015) is a television series inspired by the Leonard Elmore character Raylan Givens, who appeared in his novels Pronto (1993) and Riding the Rap (1995), and most importantly in the novella Fire in the Hole (2001). Givens (Timothy Olyphant) is a Deputy US Marshal who has a tendency to get into gunfights. As a former shooting instructor at the Federal Law Enforcement Training Center (FLETC) in Glynco, Georgia, he is uniquely skilled for that. Justified is a fun show, with interesting storylines and quirky characters. Remarkably for a telly series, the shootouts are also fairly well done.

END_OF_DOCUMENT_TOKEN_TO_BE_REPLACED

The Matrix (1999) by the Wachowskis was a defining film for the Gun Fu genre, and it featured prominently among our inspirations for GURPS Gun Fu.

Of the many shootouts in the film, I will take a closer look at the one in the lobby of the government building here, to see how it would play out in GURPS terms. Watch just the scene here (the action starts at 0:25). 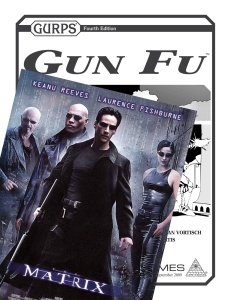 END_OF_DOCUMENT_TOKEN_TO_BE_REPLACED

I’m a doctor, I know how to sprain people.

I am a huge Sherlock Holmes fan, and the modern retelling offered by the BBC’s Sherlock (2010-) is great. I am not too keen on the actual stories, but the chemistry between the main characters, all of them great actors, is brilliant, as are many of the details. The following scene from the episode “His Last Vow” (Sherlock #3.3) shows an often underplayed side of Dr John Watson. The good doctor has always been a man of action, but he is seldom allowed to prove it in the various dramatizations. In this brief but hilariously funny scene we are reminded that Watson is a former British Army Captain with three years’ service in Afghanistan. The specifics warrant a detailed analysis in GURPS terms.

This article is part of the Melee Academy.

Stop reading if you want to avoid SPOILERS. 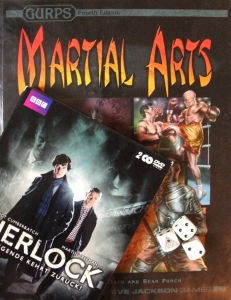 END_OF_DOCUMENT_TOKEN_TO_BE_REPLACED

Why did you strike me after I was disarmed?

The Maltese Falcon (1930) is one of the best of Dashiell Hammett’s novels. It follows private eye Sam Spade in San Francisco as he unravels the mystery of the Maltese Falcon, a jewel-encrusted gold statuette of immeasurable worth. As is typical in a Hammett story, he has to play off several parties against one other to emerge unharmed, if not victorious.

The novel has been made into a motion picture several times, the best rendition being of course the third one by John Huston. His Film Noir classic The Maltese Falcon (1941) boasts, among others, Humphrey Bogart as Sam Spade and Peter Lorre as Joel Cairo, one of the shady characters who are after the Falcon. 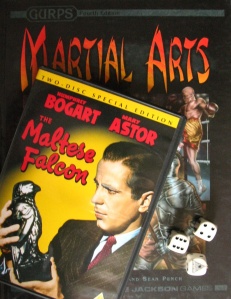 END_OF_DOCUMENT_TOKEN_TO_BE_REPLACED

Michael Mann’s Collateral (2004) is an excellent film, even though the premise of the story is a bit forced: A professional hit man, Vincent, is hired by a Colombian drug cartel to kill a whole bunch of witnesses on one night-long cab ride in Los Angeles. Despite the plot holes, the film features excellent photography, music, and of course the acting performance by the two leads, Tom Cruise as Vincent and Jamie Foxx as the cabbie Max Durocher.