This a practical review of the Baikal IZH-43KH sawn-off double-barrelled shotgun, with an eye towards its performance in games like GURPS, Call of Cthulhu, and Delta Green: The Role-Playing Game.

END_OF_DOCUMENT_TOKEN_TO_BE_REPLACED

Gentlemen, shortly you will be provided Thompson submachine guns, BARs, and uh, .351 Winchester semiautomatic rifles. We are pursuing hardened killers. It will be dangerous.

Michael Mann’s Public Enemies (2009) is but the latest effort to bring the life of infamous bank robber John “Johnnie” Dillinger on the silver screen. It follows his exploits between autumn 1933 and summer 1934, but really concentrates on his affair with gun moll M. Evelyn “Billie” Frechette. As in many other Mann movies, the law enforcement side receives almost equal attention, here in the shape of Bureau of Investigation Special Agent in Charge Melvin Purvis. While Mann undertook extraordinary effort to bring the time to life through clothing, automobiles, firearms, and locations, he stuck less rigidly to the historical facts, including the timeline. Events have been moved forward or backward, people have been omitted or changed, etc. It has to be understood that Public Enemies is not really a historical film at all, unlike Bryan Burrough’s meticulously researched book Public Enemies (2004), on which it is based. It is still an excellent movie, not the least because of its awesome score and of course its actors, including Johnny Depp as Dillinger, Christian Bale as Purvis, and Stephen Graham as “Baby Face Nelson.” 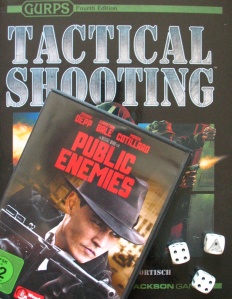 END_OF_DOCUMENT_TOKEN_TO_BE_REPLACED

This a practical review of the H&K P30L V1 semiautomatic pistol, with an eye towards its performance in games like GURPS, Call of Cthulhu, and Delta Green: The Role-Playing Game.

END_OF_DOCUMENT_TOKEN_TO_BE_REPLACED

Vincent: Under the bridge, by the river, how did you know it was an ambush?
Sam: When ever there is any doubt, there is no doubt. That is the first thing they teach you.

I have discussed John Frankenheimer’s Ronin (1998) in a previous post, dissecting a scene using GURPS. This time I look at how the same scene would play out using Delta Green: The Role-Playing Game. The latter is based on the Basic RolePlaying rules engine also used by Call of Cthulhu, but differs in many details. Watch just the scene here (the action starts at 1:56).

END_OF_DOCUMENT_TOKEN_TO_BE_REPLACED

Christopher McQuarrie’s The Way of the Gun (2000) is an imperfect cult movie. Its main characters “Mr Longabaugh” (Benicio del Toro) and “Mr Parker” (Ryan Philippe) are of course named after the famous Hole in the Wall Gang members “Butch Cassidy” (née Robert Parker) and “The Sundance Kid” (née Harry Longabaugh), and there are several references to George Hill’s Butch Cassidy and the Sundance Kid (1969), including the location where the showdown was shot. Unlike that brilliant Western, the story about two drifters who decide to finally pull a major score by kidnapping a surrogate pregnant woman suffers from plot holes, is irregularly paced, and has a good deal of forced dialogue. However, I have no issue with the dubious moralities displayed; the main characters are criminals and no more reprehensible than other fiction criminals ‒ or indeed, many nominally good guys. On the plus side, the film boasts first-class acting performances by the likes of Benicio del Toro, James Caan, and Geoffrey Lewis, an ace score, and, unsurprisingly given its title, some very cool shootouts.

END_OF_DOCUMENT_TOKEN_TO_BE_REPLACED

John McTiernan’s Die Hard (1988) is the ultimate action movie for the festive days. Like most such films made in the 1980s, it ticks many boxes of the genres covered by GURPS Gun Fu. NYPD Detective John McClane (Bruce Willis) is the ultimate badass in both body and spirit, and the shooting shown is in the same vein ‒ “Yippee ki-yay, motherfucker!”

END_OF_DOCUMENT_TOKEN_TO_BE_REPLACED

You want to be a gunfighter, huh?

Street Kings (2008) is about LAPD Detective Tom Ludlow (Keanu Reeves), a member of the Vice Special unit that seems to be inspired by the real LAPD’s controversial Special Investigations Section (SIS), a unit that got a reputation as a “gunfighting” outfit in the late 1980s. Ludlow is a renegade “gunfighter” caught up both in his own post-traumatic stress disorder and in larger issues having to do with in-service corruption and power struggles. 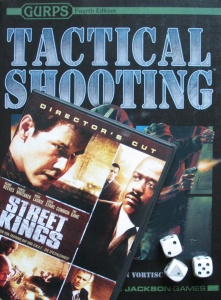 END_OF_DOCUMENT_TOKEN_TO_BE_REPLACED

OK, I wanna introduce you to a personal friend of mine: This is an M41A pulse rifle, 10mm, with an over-and-under 30mm pump-action grenade launcher.

The Armat M41A is the famous weapon arming the US Colonial Marines in Aliens (1986) and the Weyland-Yutani Corporation security forces in Alien 3 (1992) ‒ also, for some obscure reasons, the bank robbers in The Simpsons #13.12 (2002) … It accounts for a lot of the pseudo-realistic setting of Aliens, giving the main characters a mean-looking yet functional weapon to combat the dangerous Xenomorph XX121. Ultimately, the powerful, effective carbine ‒ and all the other ultra-tech gear of the year 2179, from nukes to sharp sticks ‒ does not mean much against the swarm intelligence, evolutionary perfection, and insidious breeding habits of Internecivus raptus, giving the Alien saga a distinct, rather desperate Lovecraft-esque vibe.

END_OF_DOCUMENT_TOKEN_TO_BE_REPLACED

John McTiernan’s Predator (1987) is a superb classic that combines science fiction, horror, and military action. While Predator fulfils many action movie tropes and is hence overall better suited to GURPS Gun Fu, some details merit discussion in context with GURPS Tactical Shooting. The team’s response to the first sighting of the Predator is almost a textbook counterattack manoeuvre (Tactical Shooting, p. 22) following the advice in the US Army’s field manual FM 90-5 Jungle Operations (1982): “Once contact with the enemy is made, the unit’s first action is to build up a large volume of fire.”

END_OF_DOCUMENT_TOKEN_TO_BE_REPLACED

Did I miss something? Are we going into battle?

Stephen Sommers’ The Mummy (1999) is one of my favourite pulp fiction movies. It combines a great story with lovable characters, mummy-hunting, and lots of period equipment. Professional treasure hunter Richard “Rick” O’Connell alias “Ricochet” O’Connell (Brendan Fraser) is so adept at monster-hunting that he carries a dedicated kit bag stuffed with weapons with him around (GURPS Loadouts: Monster Hunters, pp. 8-9). Let’s take a look at what he has in there.