Eugene F. McDonald, radio manufacturer and commander of the yacht Mizpah, back from a cruise about the Galapagos Islands in the eastern Pacific, greeted friends here with a tale of fighting great schools of sharks with machine guns. “They were so thick that we were afraid they would endanger the yacht. We killed hundreds of them,” McDonald said. McDonald related that his party, which included several scientists, made discoveries of a scientific nature on the islands so startling that they could not be revealed until after further exploration.

Lieutenant Commander Eugene “Gene” McDonald, an officer in the US Naval Reserve Force, was the millionaire owner of the Zenith Radio Company in Chicago, Illinois. On 03-JAN-1930, he embarked on a 5-week cruise of the East Pacific, starting in Miami, Florida, and travelling through the Panama Canal. McDonald was the owner and skipper of the Mizpah, a 56-metre luxury yacht built for then-outrageous $1.3 million using components of a discarded US Navy destroyer. While nominally based on Lake Michigan in the Lincoln Park yacht harbour in Chicago, the vessel was seaworthy and was often stationed in Miami. The Mizpah had a 27-man crew and sported eight fully equipped state rooms with real beds rather than cramped berths. 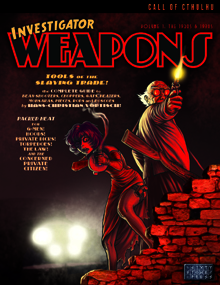 During the 1920s, McDonald, who preferred to be called “The Commander” by friends and employees, had taken part in several expeditions, most famously being the second-in-command of the MacMillan Arctic Expedition of 1925, which also included such luminaries as Lieutenant Commander Richard Byrd and Lieutenant Commander Donald MacMillan. He was a Fellow of the Royal Geographical Society. 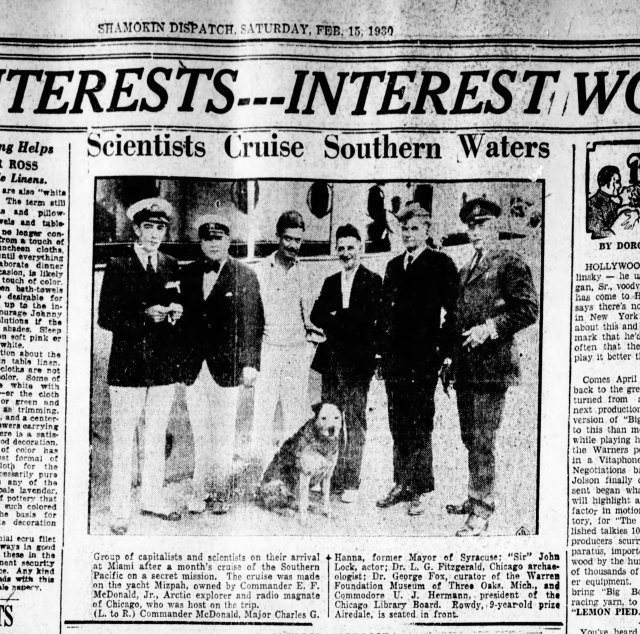 Brownell was a polymath who taught his students to integrate different fields of studies. Brownell was fluent in German after studying at Eberhard Karls Universität in Tübingen, Germany, one of the oldest universities in the world. Fox’s speciality was prehistoric Native Americans. Fox was a field researcher who in 1929 had walked some 1,280 km alone through the Bahamas Islands on a 2-month expedition. Herrmann, according to Frederick “Fred” Pasley’s 1930 book Al Capone ‒ Biography of a Self-Made Man [sic!], was once appointed book censor at the Chicago Public Library. Herrmann planned to burn “all seditious volumes found on the shelves” but was restrained before ceding his post. This certainly sounds like the actions of an Investigator trying to take a few Mythos tomes out of circulation …

In others words, seven men of action, at least two of them veterans of World War I, and archæology field researchers with spiritual interests. The actor was the odd man out, but the kind of character that always turns up in an Investigator group. He even was a comedian!

Of course, these were Armed Investigators. Their equipment stored in the ship’s locker included revolvers, semiautomatic pistols, high-powered rifles, a Thompson submachine gun, thousands of rounds of ammunition, and dynamite. The yacht also mounted a one-pounder cannon.

On the Galápagos islands, McDonald gifted one of the rifles with 1,500 [sic!] rounds of ammunition to the eccentric German dropout Dr. Friedrich Ritter, a dentist by trade and philosopher by choice who had emigrated to Floreana, one of the islands. According to the latter’s companion Dorothea “Dore” Strauch Körwin, the rifle was “a shotgun.” It remains unknown what kind of long arm(s) the explorers brought. Strauch latter collaborated with Walter Brockman for the 1936 book Satan Came to Eden about her life on the island, in which she failed to mention that she probably poisoned Ritter who in turn had almost certainly murdered two other émigrés …

The Thompson submachine gun was probably the Model 1928AC Navy pattern in .45 ACP (High-Tech: Pulp Guns 1, pp. 28-30; Investigator Weapons 1, pp. 87-89), the most expensive version available and of course the one issued by the US Navy. Strauch mentioned that “when we told him of our fear of the robbers we thought were still concealed on Floreana, he showed us his own rapid-fire rifle [sic]. It looked to me so terribly efficient an instrument of destruction that I said I now could easily believe that he came from Chicago, where such things, so we had heard, were put to daily use by ordinary citizens.”

The one-pounder cannon probably only had blank rounds available for signalling, although usually yachts employed cheaper, much smaller 10-gauge cannon for that …

Before embarking on their journey, McDonald gave an interview to a reporter of The Tampa Morning Tribune, which titled “Explorer Sails from Miami on Secret Trip Aboard Armed Yacht.” McDonald was noted to have said: “We have one chance in a thousand of accomplishing our objective, and I do not wish to discuss it before hand.” Even more cryptically, Hanna remarked regarding any mail forwarded to him: “I will get it on return ‒ if any.” The heavy armament certainly indicated a supposed element of danger to the expedition.

The newspapers called it a “secret mission.” They may not have been far off. The explorers never revealed their objective even after they returned on 12-FEB-1930. Rumours claimed that they had tried to unearth pirate treasures on Isla del Coco off Costa Rica ‒ inspiration for Isla Nublar in Jurassic Park ‒ but this does not explain the presence of the acclaimed archæologists who specialised in rather different areas of research.

McDonald was supposed to have taking a divining rod with him in his cabin ‒ to find gold or something more magical? He certainly was inclined towards the paranormal. Starting in September 1937, he cooperated with botanist Dr. Joseph Rhine at the Parapsychology Laboratory [sic!] of Duke University in Durham, North Carolina. Rhine, originally inspired by a 1922 lecture by Arthur Conan Doyle, was by then a firm believer in Extrasensory Perception (ESP), which he wanted to test nationwide with the help of McDonald over NBC’s Blue Network in a programme called the “The Zenith Foundation.” This was to prove that ESP existed by having the listeners trying to “read” the thoughts of 10 “senders” emitting their thoughts in a Chicago studio. Anyway, this certainly sounds like a man who would not be startled by the Mythos.

Now, for the real goal of the expedition. As a former active US Navy Intelligence officer, McDonald was almost certainly aware of or even a member of the Office of Naval Intelligence (ONI)’s Parapsychology, Paranormal, and Psychic Phenomena Division. He was possibly also involved in the US Army’s Black Chamber effort owing to his familiarity with radio equipment. After the 1928 raid on Innsmouth, “P Division scoured the world for more information about beings like the ones encountered in Innsmouth” (Delta Green, p. 33). Were McDonald and company after Deep Ones? Did they search for R’leyh, famously located in the Southern Pacific? The former sounds more likely. The references to “attacks” by sharks and their defence against them seems like a veiled reference to combat with Deep Ones.