Christopher McQuarrie’s Mission: Impossible ‒ Fallout (2018) is the latest instalment in the somewhat tired but still fun Mission: Impossible franchise. The highly cinematic films are prime examples for GURPS Action scenarios. Nevertheless much of the shooting is actually reasonably realistic. I take a look at a short scene in which IMF Agent Ethan Hunt (Tom Cruise) shows off his gunfighting skills, and analyze how it would play out in GURPS terms, specifically using GURPS Tactical Shooting. 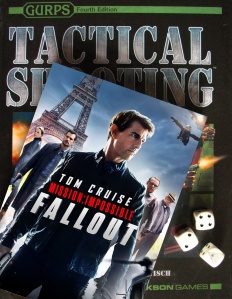 END_OF_DOCUMENT_TOKEN_TO_BE_REPLACED

Although by now rather old news, I’d like to mention that The Unspeakable Oath #25 contains my article “Armed at the Opera,” in which I examine props and procedures that would be useful for a successful “Night at the Opera” of your modern DELTA GREEN agents. Large parts would also be interesting reading for Armed Investigators of the Mythos in any period. And of course, there are loads of other cool articles by other fine chaps in there. Check it out!

In the 1930s, Charles Reber, a US Army veteran of the Spanish-American War and an ex-Major with the Oklahoma National Guard, was a pioneer ballistics and fingerprint expert with the Oklahoma State Bureau of Investigation & Identification, who consulted on numerous cases.

This alone would make him an interesting example for an Investigator of the Mythos. During the hunt for Charles “Pretty Boy” Floyd, he was also painted as a template for an Armed Investigator in newspaper articles like “One-Man Army Rigs Auto for Sudden Battle” in The Fresno Bee (08-JUN-1934):

Though he looks like a staid schoolteacher [!], is quite and unassuming, Reber is as expert with a gun as with his ballistics apparatus … Inside his sedan he has rigged out a rolling arsenal. By reaching up with his left hand he can pull a sawed-off shotgun, loaded with buckshot, from a rack in the car. With his right hand he can claw down a Browning automatic rifle. Reaching forward he can pull a Thompson sub-machine gun from a rack on the dash of the car, where it is flanked by holders containing clips [sic] of ammunition. In the seat with him he can reach a Colt .45 automatic or a long-range German Luger automatic of smaller caliber, but deadly accuracy. On the floor, in a case, he can reach hand grenades, [tear] gas bombs and extra clips [sic] of ammunition ‒ shotgun shells, high power rifle cartridges and pistol ammunition, all carefully arranged to be “handy.” In the back seat, for long range work, he has an old Krag-Jorgensen [sic] army rifle, made famous in the Spanish-American war for its deadliness. Its sights are carefully adjusted, with wind gauge, elevation, and important other arrangements. END_OF_DOCUMENT_TOKEN_TO_BE_REPLACED