This a practical review of the Baikal IZH-43KH sawn-off double-barrelled shotgun, with an eye towards its performance in games like GURPS, Call of Cthulhu, and Delta Green: The Role-Playing Game.

The IZH-43KH sawn-off double-barrelled shotgun with external hammers was introduced in 2000 by Izhevsky Mekhanichesky Zavod of Izhvesk, Russia. It resembles the double-barrelled hammer shotguns made since the 1870s and is chambered for 12-gauge 2.75” (18.5×70mmR) shells. The 50.8-cm (20”) barrels are short for a shotgun, making it similar to the sawn-off coach guns popular with sheriffs and the stagecoach guards riding shotgun of the late 19th century and gangsters of the early 20th century. Between 2005 and 2008, the IZH-43KH was sold as the Remington SPR220 Spartan in the USA.

The barrels on the IZH-43KH are cylinder-bored and lack chokes. Overall length of the gun is 91 cm (35.8”), loaded weight 3.6 kg (7.9 lbs). The short barrels and low weight make the gun handy, but together with the primitive bead sight and absence of chokes the barrels make long-range shots with buck or birdshot difficult. 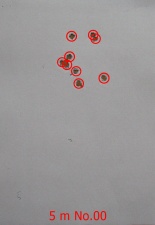 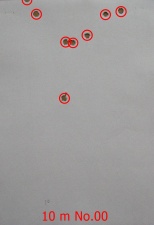 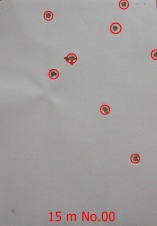 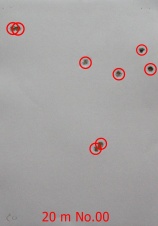 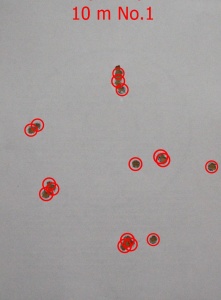 From these patterns, it becomes clear that even a sawn-off shotgun scatters very little horizontally, despite what the movies and many games would make you believe.

The IZH-43KH has two triggers ‒ front trigger for the right barrel, rear trigger for the left ‒ which can be pulled simultaneously. That requires two fingers, good timing, and a solid shooting stance. If the barrels do not go off at the same time, the second shot will go high by a wide margin due to the heavy recoil and muzzle rise. That said, it is not difficult to fire both shots at once and not too punishing for the shoulder either. The manual advises against it, of course. Firing both barrels simultaneously at a target 41 cm wide and 29.7 cm high (16.1”×11.7”) at 20 m, 10 of the 18 pellets hit, the others going high and low. For practical purposes, it is probably better to fire first one and then the other barrel. 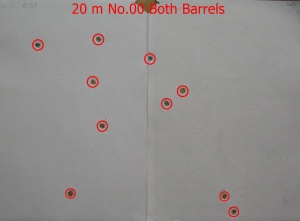 The IZH-43KH has a sliding safety that blocks the triggers at the tang of the shoulder stock. It has sling swivels. The gun can be disassembled in seconds into its main components or assembled back again. 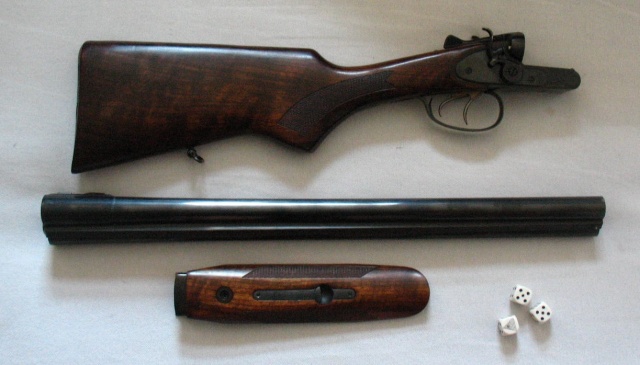 In GURPS, the rules for The Sawed-off Shotgun (High-Tech, p. 106) apply, but note that the IZH-43KH already has riot-length barrels.

In Delta Green, the IZH-43KH mainly differs from other Shotguns by its limited Ammo Capacity.

At the Picture Show

The IZH-43KH has not been featured so far in a film or telly show. However, a hammer shotgun with coach-length barrels and overall similar appearance and performance is used to great effect by cowboy “Boss” Spearman in Open Range (2003).