This a practical review of the H&K MR223 semiautomatic carbine, with an eye towards its performance in games like GURPS, Call of Cthulhu, and Delta Green: The Role-Playing Game. 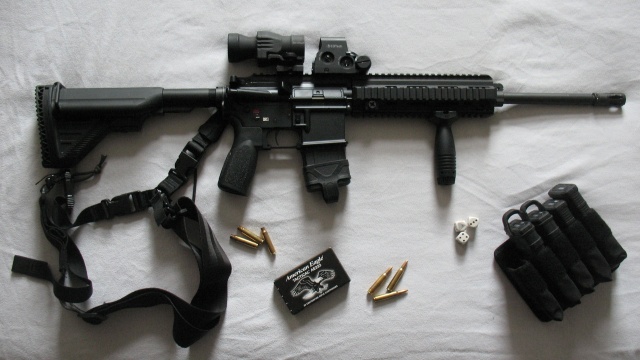 END_OF_DOCUMENT_TOKEN_TO_BE_REPLACED

Fellow Hellion Douglas Cole of Gaming Ballistic has a Kickstarter going for his book called Dungeon Grappling, which promises to add more oomph to grappling and gripping using the Dungeons & Dragons game engine (all editions, as I understand).

This rifle was first captured during the battle of Hamel on July 4. It had only just been issued to certain divisions; other divisions were equipped with it later on … It was too conspicuous and too slow a weapon to be really effective against tanks, though it could easily penetrate them at several hundred yards range.

The Tankabwehrgewehr 18 (“antitank rifle model 1918”) or Tankgewehr 18 ‒ both designations have been observed in official material ‒ is the first purpose-designed antitank weapon produced anywhere. The T.-Gew.18 appears in the last year of the Great War to combat the Allied tanks on the Western Front. Intended as a stop-gap measure until the MAN-Maxim T.u.F.-M.G.18 antitank/antiaircraft machine gun reaches production ‒ which it never does ‒ it is a single-shot bolt-action design produced by the Mauser-Werke of Oberndorf, Germany.

END_OF_DOCUMENT_TOKEN_TO_BE_REPLACED

You want to be a gunfighter, huh?

Street Kings (2008) is about LAPD Detective Tom Ludlow (Keanu Reeves), a member of the Vice Special unit that seems to be inspired by the real LAPD’s controversial Special Investigations Section (SIS), a unit that got a reputation as a “gunfighting” outfit in the late 1980s. Ludlow is a renegade “gunfighter” caught up both in his own post-traumatic stress disorder and in larger issues having to do with in-service corruption and power struggles.