Between 1925 and 1968, Peter von Frantzius Sporting Goods was a famous sporting goods store on the North Side of Chicago, Illinois, at 608 Diversey Parkway (GURPS High-Tech: Pulp Guns 1, p. 5; Investigator Weapons 1, p. 25). His Sport Manual from 1927 has 97 pages and describes a marvellous selection of kit useful to the investigator. 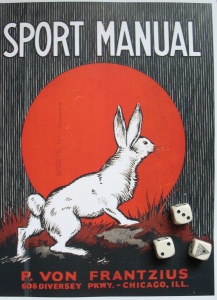 Note that, like many stores at the time, von Frantzius actually stocked few of these wares, especially the more exotic and/or more expensive ones, instead ordering them by express from the manufacturers or wholesalers whenever he received a firm order. The customer could then fetch them at his store after a few days.

Von Frantzius was an unscrupulous businessman who did not care who his customers were because “we are in the business of selling firearms.” He had an improvised shooting range behind his shop, the target consisting of a tree trunk riddled with submachine gun bullets. In 1931, von Frantzius was given the ridiculous sentence to pay a fine of $25 for not keeping complete records of his gun sales ‒ when in fact he had gone out of his way to obfuscate his sales by making fake deliveries of empty packages weighted with bricks. Not mentioned in his catalogue but offered nonetheless was having a gun’s serial number removed by his gunsmith Valentin Juch, a service that cost $2 (Investigator Weapons 1, pp. 22-23). This was not illegal at the time but highly suspicious as there was no need to do this unless you planned on committing illegal activities with the gun.

This was a commercial Modell 40B bolt-action sporting rifle (GURPS High-Tech: Pulp Guns 2, p. 6; Investigator Weapons 1, pp. 67-69), chambered especially for the US market for the .30-06 Springfield cartridge but also available in a number of German Mauser chamberings. Von Frantzius offered the former for $70, the latter for $55.

A semiautomatic shotgun (High-Tech: Pulp Guns 1, p. 23; Investigator Weapons 1, pp. 82-83), not only “unquestionably the most popular shotgun in sportdom for waterfowl and field shooting,” but also common with the gangsters of Chicago. This type of gun played a role in most of the high-profile hits of the era. Sam “Golf Bag” Hunt, hit man for Capone’s Outfit, liked to carry his tools in a golf bag (High-Tech: Pulp Guns 1, p. 33; Investigator Weapons 1, p. 25), usually with sawn-off barrel. Von Frantzius offered the Model 11A in 12-gauge 2.75” for $52.50.

The semiautomatic pistol designed by Heinrich Ortgies and manufactured by the Deutsche Werke of Erfurt, Germany, was already out of production by 1923, but since hundreds of thousands were made and most were exported to the USA at very low prices, these continued to be available throughout the 1920s (High-Tech: Pulp Guns 1, p. 19). Barker-Karpis Gang member Harry “Dutch” Sawyer (née Harry Sandlovich) was arrested with a .25-calibre Ortgies in 1935. This pistol erroneously ended up in the “Dillinger Gang’s Weapons” display at the FBI Headquarters. Von Frantzius offered the Ortgies in .25 ACP (6.35×16mmSR) for $11 and in .32 ACP (7.65×17mmSR) for $12.

The snub-nosed .38-calibre revolver favoured by gangsters, “easily carried in a coat side pocket” (High-Tech: Pulp Guns 1, p. 13; Investigator Weapons 1, pp. 35-37). One revolver sold by von Frantzius was found near North Side Gang member Frank Gusenberg, shot dead in the “St. Valentine’s Day Massacre” on 14-FEB-1929. It had its serial number removed and the hammer ground off to improve the draw from inside a pocket (High-Tech: Pulp Guns 1, p. 8; GURPS Tactical Shooting, p. 32; Investigator Weapons 1, p. 10). Another one was sold to Outfit member Frank Foster (née Frank Citro) and used to murder Chicago Tribune police reporter Alfred “Jake” Lingle in a Chicago underground station on 09-JUN-1930. It had its serial number removed. Von Frantzius offered the Detective Special for $28.50.

A Zielvier scope with 4× magnification made by Carl Zeiss of Jena, Germany, “excellent for distances up to [731 metres]” (GURPS High-Tech, pp. 155-156; Investigator Weapons 1, p. 74). Perfect for that Mauser rifle mentioned above. Von Frantzius offered the Zielvier for $45, plus $15 for the mount and a further $15 for fitting it.

A handheld 16-mm Bell & Howell Filmo movie camera for the amateur ‒ “no focusing, no cranking, no shutter adjustment, no tripod necessary to take movies of theatre quality on the first try” (High-Tech, p. 43). Von Frantzius offered it with a Taylor-Hobson Cooke f/3.5 lens for $180, and charged $6 per 33-m film roll (High-Tech, p. 44) ‒ enough for 5 minutes ‒ including developing and return postage.

The Wisbrod Bullet-Proof Vest, designed by Elliott Wisbrod but little more than a copy of the earlier Dunrite Bullet Proof Vest designed by Alexander Dunlap and made by the Detective Publishing Company, was lined with steel but concealed as an ordinary blue vest to be worn with a suit. “Guaranteed to stop any caliber revolver and pistol bullet, up to and including the .45 cal Colt’s Automatic steel jacketed bullet. Rifle bullets and German Luger and Mauser pistol bullets are not included” (High-Tech, pp. 65, 66; Investigator Weapons 1, p. 49).Von Frantzius offered a full-coverage vest (front, back, and sides) for $75 in all  sizes from S to XXL.

Complete outfit consisting of Sam Browne-style revolver belt, flap holster (High-Tech, p. 154; Investigator Weapons 1, p. 103), puttees, and regulation police club made of cocobolo wood (Investigator Weapons 1, p. 104). Von Frantzius offered the ensemble for $11.30. All you needed to look like a genuine Chicago Police Department officer was a dark blue uniform with hat and a police star. Von Frantzius offered the latter for $1.25, plus $2.50 for the correct inscription. A set of Peerless handcuffs (High-Tech, p. 217) was $10. A complete policeman’s outfit was perfect to impersonate a police officer. Gangsters liked to do that to trick members of rivalling gangs or the unsuspecting public.