Justified (2010-2015) is a television series inspired by the Leonard Elmore character Raylan Givens, who appeared in his novels Pronto (1993) and Riding the Rap (1995), and most importantly in the novella Fire in the Hole (2001). Givens (Timothy Olyphant) is a Deputy US Marshal who has a tendency to get into gunfights. As a former shooting instructor at the Federal Law Enforcement Training Center (FLETC) in Glynco, Georgia, he is uniquely skilled for that. Justified is a fun show, with interesting storylines and quirky characters. Remarkably for a telly series, the shootouts are also fairly well done.

END_OF_DOCUMENT_TOKEN_TO_BE_REPLACED

On 25-FEB-1928, Charles “Limpy” Cleaver and eight of his gangmembers robbed the Grand Trunk postal mail train at Evergreen Park, Illinois, scoring $133,000 in cash after blowing off the doors of the mail car. US Post Office inspectors very quickly tracked down the robbers, arresting most of them within days of the robbery. They found an arsenal of weapons, many of them used during the robbery, in an attic room in Cleaver’s home at 10235 South Elizabeth Street in Chicago, Illinois. The room was accessed through a secret stairway with a door leading to it hidden in the back of a closet.

This photo shows US Postal Inspector T.G. Rowan in front of the seized weapons and equipment. 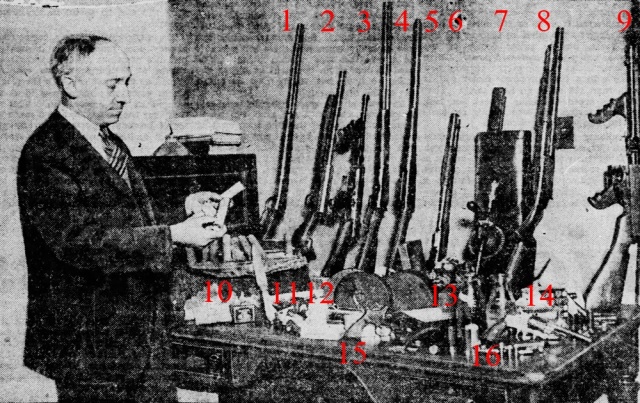 END_OF_DOCUMENT_TOKEN_TO_BE_REPLACED

Part of Lovecraft’s Investigators and Their Guns.

Of course I had my revolver in my coat pocket, but any motion of mine to reach and draw it would be instantly obvious.

Written by Adolphe de Castro and completely revised by H.P. Lovecraft, this story is set in the Gaslight era, or more exactly in the Old West. That the unnamed investigator carried his revolver in a pocket does not necessarily indicate a small pocket revolver, as many people at the time carried even rather large weapons in pockets, although often fitted with short barrels. A Colt Single Action Army revolver in the so-called Sheriff’s configuration in .45 Long Colt (11.43×33mmR) (Investigator Weapons 1: The 1920s and 1930s, pp. 42-43) would be quite likely. A pocket weapon like the S&W Safety Hammerless revolver in .32 S&W (7.9×15mmR) or .38 S&W (9×20mmR) (Investigator Weapons 1, p. 57) would also be possible.

The Matrix (1999) by the Wachowskis was a defining film for the Gun Fu genre, and it featured prominently among our inspirations for GURPS Gun Fu.

Of the many shootouts in the film, I will take a closer look at the one in the lobby of the government building here, to see how it would play out in GURPS terms. Watch just the scene here (the action starts at 0:25).

END_OF_DOCUMENT_TOKEN_TO_BE_REPLACED

The famous MP5 submachine gun produced by Heckler & Koch has so far not been the centre of much scholarly discussion. Frank James’ The MP5 Submachine Gun (Polynesian Productions, 1996) is two decades old and has been out of print for some time. Leroy Thompson’s The MP5 Submachine Gun (Osprey, 2014) is more recent, but intended primarily for laymen. Die Maschinenpistole 5 ‒ Technik & Taktik (“The MP5 ‒ Technology and Tactics”) by Axel Männich and Markus Stappen (Verlag für Polizeiwissenschaft, 2009) is a slim volume mainly concerned with the weapon’s application in police service, as is the similar Practical Guide to the Operational Use of the MP5 (Erik Lawrence Publications, 2015) by Erik Lawrence. In short, it is high time for a new book about the MP5, and it is commendable that Manfred Kersten has tackled the task in his new German-language book, Die MP5 ‒ Eine Waffe für Generationen (“The MP5 ‒ A Weapon for Generations”). Kersten is one of the authors of the big black book, Heckler & Koch (Weispfennig, 1999), as well as of many other works about German firearms. Unfortunately, his new book is not convincing. END_OF_DOCUMENT_TOKEN_TO_BE_REPLACED