This a practical review of the Glock P9M semiautomatic pistol, with an eye towards its performance in games like GURPS, Call of Cthulhu, and Delta Green: The Role-Playing Game. 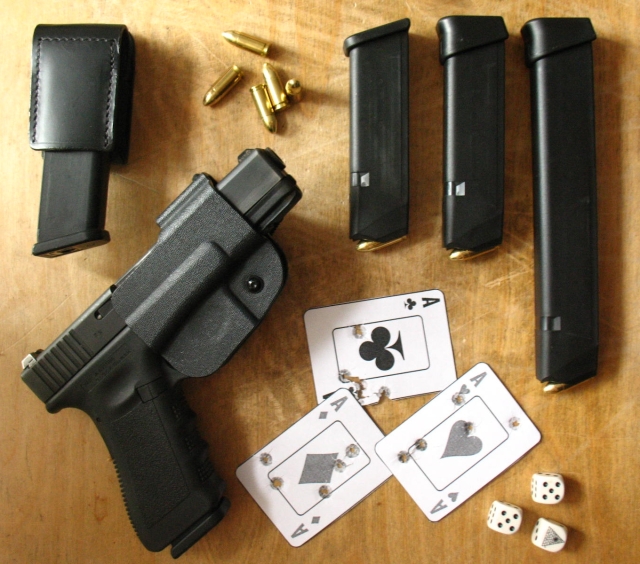 The Glock P9M is a special version of the Glock 17, the famous pistol designed by Gaston Glock of Deutsch-Wagram, Austria. A semiautomatic pistol chambered for the 9×19mm Parabellum cartridge, it was modified for and adopted by the German GSG9 anti-terror unit in 1993. The P9M stands for Pistole 9 Maritim; ie, the ninth pistol to be introduced under the official German classification system used at the time, between the H&K P8 and H&K P10. As its name suggests, the P9M features modifications for effective use in a maritime environment. It has both the firing spring cups that allow self-loading operation when the gun is filled with water and the more powerful red firing spring that ensures ignition underwater and with various brands of service ammunition, having a force of 28 N as opposed to the standard 24 N. Its magazines have a large hole drilled into the bottom to drain quickly. Furthermore, the P9M comes standard with 3-dot metal night sights with tritium inserts from Meprolight of Or Akiva, Israel. The spring cups, firing spring, and tritium sights have since all been offered as optional accessories for the standard Glock 17.

Like all Glocks, the P9M uses a Browning-Petter-SIG action, an internal striker, and the safe-action trigger system. The lack of external controls except for the magazine release button and slide catch makes it smooth to carry concealed and easy to operate.

The Glock 17/P9M is extremely reliable. I have never witnessed malfunctions that were not the result of a user mistake such as an improper grip (“limp-wristing”). Glock magazines are often carried underloaded with one round less than full capacity, as fully-loaded magazines are difficult to insert into the pistol with a cartridge chambered, which can lead to a bad reload when you are doing a “tactical reload” ‒ that is, the magazine will not seat properly and either drop out immediately or cause a jam after the chambered cartridge has been fired. With an extended 19-round magazine, you can use underloaded magazines and still have 18 rounds on tap.

The Glock P9M is 18.6 cm (7.32”) long and has a 11.4 cm (4.49”) barrel with polygonal rifling. The plastic safe-action trigger is rather gritty, but is almost as light as a single-action trigger, with a short travel and an excellent reset, allowing for good practical accuracy and quick follow-up shots, which are also helped by the low bore axis. At 7 m (7.7 yards) ‒ a typical distance both in IPSC matches and self-defence situations ‒ it is easy to place five factory-loaded 8-g (124-grs) Seller & Belliot bullets into a playing card even if shooting relatively fast. Putting five shots into an NRA B-3 50 Foot Rapid Pistol target at 15 m (16.4 yards) is also no problem.

Case ejection with Glocks is weak and often irregular, with the casings frequently getting ejected straight back into the shooter’s face ‒ an unwelcome phenomenon known as “brass to face.”

Empty Glock magazines often do not drop free, the manual in fact suggesting that the magazine is pulled out with the off hand. This obviously does not promote a fast reload. Some people try to alleviate this by sanding the magazine sides and/or weighting the magazines with metal floor plates available on the aftermarket. Experienced shooters will habitually perform the “Glock shake,” a twisting movement of the hand that is intended to flip the magazine out to the side.

Dirty magazines ‒ even just from extended shooting ‒ can prevent the follower from rising completely when the magazine is empty, which in turn will not engage the slide catch. This is not a malfunction per se, but will reduce your reloading time.

As to the underwater operation, no, I have not tried this. The amphibious capability is a feature that really nobody needs, except for those few shooters who are, in fact, amphibious. Note that the pistol is mainly intended to be reliable around water, ie, after a dive or swim, not primarily for actual shots underwater. It does work, however, to the very limited extent that bullets are effective under water at all.

Glock has made millions of pistols from 1982 in five different generations. However, the original order for the P9M in 1993 was only for 250 pistols. Eventually, additional shipments (in either GEN2 or GEN3) have been ordered as the GSG9 has gone through their pistols, and a few other small agencies under the German interior ministry have also acquired it. The different orders of the P9M show slight differences in the markings. The GSG9 has periodically surplused and replaced these pistols with new ones. Some have been refurbished by Glock and made available on the civilian market in Germany. The P9M shown dates to 1994. It has many thousands of shots through it and still functions flawlessly.

Suitable gear for the Glock includes the open Speedsec 3 kydex holster by Höppner & Schumann of Troisdorf, Germany, or the open Yaqui leather holster by Sickinger of Ottnang, Austria, as well as open Sickinger Combat Single Box leather magazine holders. In addition to the standard 17-round magazines, the extended yet almost identically-sized 19-round magazines with the +2 base plate are useful. The 33-round magazine was developed for the Glock 18 machine pistol and as such is mainly a gimmick when used with a semiautomatic, although such extended magazines are quite popular even in ordinary pistols with some special forces, eg the French GIPN anti-terror unit.

Disassembling a Glock beyond taking off the slide and removing the barrel and main spring requires a takedown tool. This is an unwelcome complication. You also need a tool to take apart the magazines for cleaning. A number of otherwise less successful pistol designs take a simpler approach to this.

In GURPS, the P9M’s maritime modifications remove the Malf. penalty for Firing Underwater (High-Tech, p. 82). The tritium sights count as improved visibility sights (High-Tech, p. 156) when Shooting in Darkness (GURPS Tactical Shooting, pp. 18-20). Jams induced by “limp-wristing” are typical for shooters with Guns (Pistol) skill at default or those who do not meet the required MinST (High-Tech, p. 81). Fully loaded Glock magazines inserted while the slide is closed ‒ eg, during a tactical reload (Tactical Shooting, p. 20) ‒ could result in a -1 penalty to Fast-Draw (Ammo). Sticky magazines are also worth a -1 penalty to Fast-Draw (Ammo); experienced users will only employ magazines they have tested previously on the range or which they have modified.

In Delta Green, the P9M does not differ from other Medium Pistols except for its Ammo.

At the Picture Show

My favourite scenes involving an ordinary Glock 17 are in Justified (2010-2015), in which it is frequently and expertly used by US Marshals Deputy Raylan Givens (Timothy Olyphant), even though in the show’s reality it is the almost identical-looking Glock 21, Givens claiming it is a .45. 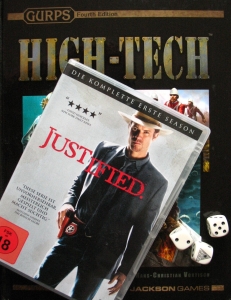