Part of Lovecraft’s Investigators and Their Guns.

Blasphemous influences seemed to surround me and press chokingly upon my senses. Sleep, I decided, would be out of the question; so I merely extinguished the lamp and threw myself on the bed fully dressed. No doubt it was absurd, but I kept ready for some unknown emergency; gripping in my right hand the revolver I had brought along, and holding the pocket flashlight in my left.

While most of the gun use in H.P. Lovecraft’s writing is a one-sided affair, one of his most iconic stories features a veritable shootout. Practically all of the action comes to us second-hand, through the letters that Professor Albert Wilmarth received from Henry Akeley. This makes it feel less immediate, but the descriptions still suggest severe combat.

Akeley, living in a remote area of Vermont, was beset by alien forces and their local agents. He protected himself with a large pack of guard dogs and a “big-game repeating rifle” which he used so extensively that at some point he had to restock his ammunition, buying “several cases.” Considering the standardized ammunition packaging of the 1920s, this would mean 1,000 rounds per case, suggesting considerable ammunition expenditure. Of course, Lovecraft could have mixed up the term with “box,” generally indicating a much smaller unit of 20 rifle rounds per box, but even that would mean quite a lot of shooting. Since Lovecraft was probably most familiar with .22-calibre ammunition, he might have thought of the 50-round packages in which .22 Long Rifle cartridges usually came at the time. Even those are small boxes rather than cases, though, so perhaps he actually did mean that Akeley bought several thousand rounds. At over $100 per thousand for a serious calibre like the .30-06 Springfield, that would have meant serious outlay, however.

The rifle type is not specified. To an American in the 1920s, “repeating rifle” would probably first suggest a lever-action rifle, although the term was also used for bolt-action, pump-action, and even semiautomatic rifles.

“Big-game” indicates a powerful calibre. Some commentators take this to mean “elephant gun,” ie a gun suitable for African or Indian big-game hunting, but it is far more likely that it is meant for hunting American big game – bear and elk, moose and grizzly. For these, Philip Sharpe’s Complete Guide to Handloading (1937) suggests the .30-06 Springfield (7.62×63mm) cartridge as entirely sufficient, the .30-06 being “capable of taking any of the heaviest game on the North American continent.” John Caswell writes in Sporting Rifles and Rifle Shooting (1920) that it is the equal of the .375 Nitro Express (9.5×64mmR) used in English double rifles.

Another clue is the fact that Akeley bought several cases of ammunition in Brattleboro, Vermont. In 1928, Brattleboro was a small town with a population of less than 10,000, and any purchases would have to be done at a hardware store rather than a gun shop. That, in turn, would indicate that the calibre would have to be a common one, as a small-town hardware store was unlikely to stock cases ‒ or even just boxes ‒ full of unusual ammunition that it could not sell. The primary source for guns and ammunition in 1928 would have been the Robbins & Cowles Hardware Store at 165 Main Street.

However, Akeley’s car was an “antique” Ford, probably a Model T as introduced in 1908. A man with such a car is unlikely to possess the latest firearm, so an older model rifle is more probable, perhaps a Krag-Jørgensen M1898 in .30-40 Krag (7.62×58mmR). The Krag rifles, former US Army issue, were available pre-war for $12.50 and were sold as surplus from 1922 via the NRA for only $6. Barnes reports on the cartridge that while “it is underpowered for moose or brown bear,” “the 30-40 has nevertheless been used successfully on all species of North American big game.”

Of course, a foreign pattern such as a German Mauser (Investigator Weapons 1, pp. 67-69) would also be possible. New Mauser hunting rifles were expensive, though, going for at least $60.

An interesting pick would be the Russian Mosin-Nagant M1891, as chosen by the armourer of the H.P. Lovecraft Historical Society film The Whisperer in Darkness (2011). Still the front-line infantry weapon of the Soviet Union in 1928, it would appear to be an unlikely contender. However, during the Great War the USA had contracted with Russia to provide millions of Mosin-Nagants that were license-made by Remington and Westinghouse. Many were never delivered, and some 280,000 were sold off between 1919 and 1928 via the NRA for $7 apiece, later even for $3. However, these were in 7.62×54mmR Mosin-Nagant, an odd calibre that would be unlikely to be on stock at a hardware store in a backwater burg like Brattleboro. Fortunately, this can be explained by the existence of a model offered by Francis Bannerman Sons (Investigator Weapons 1, p. 25) from 1926, which was converted to fire the .30-06. At $14, this would be a good choice for Akeley.

Considering the close relation between the term “repeating rifle” and lever-action Winchesters, the Model 95 in .30-06, .30-40, or .405 Winchester (10.45×65mmR) for $46 would be rather likely, especially since it could have been in Akeley’s possession for a long time. The Model 1895 in .405 had been used by US President Theodore Roosevelt and his son Kermit on the Smithsonian-Roosevelt African Expedition (1909-1910) to bag a variety of big-game animals, including lion and rhinoceros, a fact that had been widely publicized and was possibly known to Lovecraft. 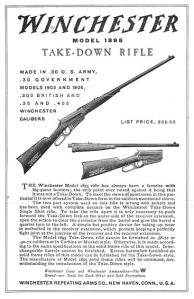 Another possibility would be the Marlin Model 93 lever-action rifle or the Winchester Model 94 lever-action rifle (Investigator Weapons 1, p. 74), both in .30-30 Winchester (7.62×51mmR). Although that cartridge is considered one of the least powerful of the American big-game numbers, mainly for use on deer or black bear, Marlin still advertised their pattern in 1922 as “the ideal rifle for hunting all species of big game found on the North American continent.” Both models cost $35. The main reason to pick either weapon is that “this ammunition is obtainable everywhere.”

A less probable choice would be the Remington Model 8 semiautomatic (Investigator Weapons 1, pp. 70-71). Its .35 Remington (9×48mm) cartridge is considered more powerful than the .30-30 Winchester, and Remington advertised it as suitable for grizzly. However, the Model 8 rifle was generally called an “automatic” at the time and thus, while technically also a repeater, not really what people meant when talking about a “repeating rifle.” It was also rather expensive at $58.

All in all, I would lean towards a Krag M1898, Mosin-Nagant M1891, or Springfield M1903 bolt-action, although my best guess is actually a Winchester Model 95 lever-action.

The conflict between Akeley and his adversaries escalated steadily, until he was fired upon while driving in his Ford along a lonely road in the summer of 1928, “a shot grazing his car.” About a week later, there were “bullets flying outside the farmhouse,” killing three of his guard dogs. Finally, an actual firefight broke out:

After midnight something landed on the roof of the house, and the dogs all rushed up to see what it was … There was a terrible fight up there, and I heard a frightful buzzing which I’ll never forget. And then there was a shocking smell. About the same time bullets came through the window and nearly grazed me. What was up there I don’t know yet, but I’m afraid the creatures are learning to steer better with their space wings. I put out the light and used the windows for loopholes, and raked all around the house with rifle fire aimed just high enough not to hit the dogs. That seemed to end the business, but in the morning I found great pools of blood in the yard, beside pools of a green sticky stuff that had the worst odour I have ever smelled.

Here we have two parties firing at each other, one of them even using cover and varying shooting positions to his advantage. It reminds me of scenes in films like Death Hunt (set in 1931) or even the shootout at the Little Bohemia Lodge in Public Enemies (set in 1934), where the protagonists blockade themselves in cabins and fire through windows at their attackers. Note the tactically sound move of extinguishing the light, which allowed Akeley to move from position to position without giving himself away. It probably also allowed him to better see his opponents, at least as shadows in the night.

To Lovecraft critic Sunand Joshi, the shootout discredits the story: “Their gun-battle with Akeley takes on unintentionally comic overtones, reminiscent of shoot-outs in cheap western movies” (A Subtler Magick: The Writings and Philosophy of H.P. Lovecraft, p. 147, and I Am Providence: The Life and Times of H.P. Lovecraft, p. 763). However, Joshi fails to explain what it is that makes this desperate last stand comical. He seems to argue that the extraterrestrials should not have “human flaws and motivations,” but fails to recognize that it is Akeley who is desperately and literally fighting for his humanity here, not the Mi-Go.

We find out that Akeley’s rifle shots took not only effect on the human cultists (“Walter Brown is missing … I must have got him with one of my shots …”), but also on the Mi-Go, with at least one of them getting damaged enough to spill “pools” of its green “blood or juice.” Of course we cannot be sure, since “the creatures always seem to try to take their dead and wounded away.” They cannot be too tough, as at least one gets destroyed by Akeley’s dogs. This rather contradicts the Mi-Go description in the rules (Call of Cthulhu, Sixth Edition, p. 168, and Call of Cthulhu, Seventh Edition, p. 301), according to which impaling weapons, which include firearms, do only minimum damage. 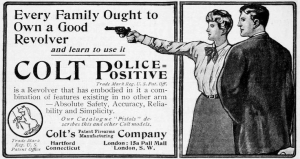 When Professor Albert Wilmarth finally started investigating in person, he wisely armed himself as well. For his trip to Vermont, he brought not only a pocket flashlight but also a revolver. He had no occasion to use it and we do not learn more about it. We can speculate that it was probably a medium-sized weapon. A professor is not likely to carry a large-calibre combat revolver like a S&W Hand-Ejector with 10-cm (4”) barrel in .44 S&W (10.9×29mmR) – unless he is Dr “Indiana” Jones, of course! A small pocket revolver would be possible, but pocket revolvers are usually the choice of people who want to carry their gun concealed. Wilmarth probably brought the gun in his valise. With their short barrels, lousy sights, and stubby grips, pocket revolvers are also difficult to shoot. A likely choice would be a Colt Police Positive with 10-cm (4”) barrel in either .32 S&W Long (7.9×23mmR) or .38 S&W (9×20mmR). This is a fairly light weapon chambered for low-recoiling ammunition. Compared to many other revolver manufacturers of the time, Colt’s is a household name and a quality brand that is easily affordable by a tenured literature professor.