They just hit him!

Growing up in the 1980s, one of the few telly series that made at least an effort to portray realistic combat was Miami Vice (1984-1990). In hindsight there is much to criticise, but back then it was an eye-opener in many ways, and that is even without accounting for the story-telling and the score! For example, they included cutting-edge, often gunsmithed weaponry, starting with Sonny Crockett’s D&D Bren Ten pistol in 10×25mm and Ricardo Tubbs’ cut-down Ithaca Model 37 shotgun (GURPS High-Tech, p. 105). 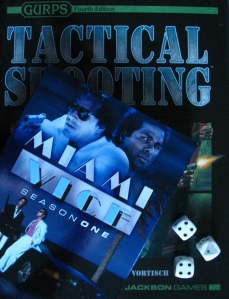 The gun handling was so-so, with one major exception. For “Calderone’s Return: Part 1 ‒ The Hit List” (Miami Vice #1.4) (1984), they literally brought in a specialist: The hit man Ludovici “The Argentinean” Armstrong is played by Jim Zubiena, an actor who at the time competed successfully in shooting sports and became an IPSC Grand Master. One of his scenes warrants a detailed analysis using Tactical Shooting. Watch just the scene here (the action starts at 1:14).

Stop reading if you want to avoid SPOILERS.

Prelude: Armstrong is an assassin (GURPS Action 1: Heroes, p. 7) adept in the Assaulter shooting style (Tactical Shooting, pp. 47-48). He has just assassinated drug dealer Felix Castranova with a 12-gauge Franchi SPAS 12 dual-mode shotgun (High-Tech, p. 106), putting four buckshot loads into him and his bodyguard through the door (Tactical Shooting, pp. 30-31) of a 1984 Cadillac DeVille limousine. Armstrong is accosted by Castranova’s chauffeur Nicky “the Kid.” Nicky levels a .38-calibre S&W Model 36 Chief’s Special at him. Both are in Triggered mode (Tactical Shooting, pp. 33-34). They stand about 3.5 m (4 yards) apart. Nicky orders him to drop the shotgun and to put his hands up, which Armstrong does. “You stay right there!” Then Nicky briefly takes his eyes off Armstrong to check on Castranova.

1st Second: Armstrong and Nicky have both taken Wait manoeuvres; Armstrong will draw his pistol as soon as Nicky makes a mistake, and Nicky will fire his revolver as soon as Armstrong makes a wrong move. This is a Cascading Waits situation (GURPS Martial Arts, p. 108): In order to find out who acts first, they have to roll a Quick Contest. Armstrong rolls against Fast-Draw (Pistol); +1 (Combat Reflexes) +Basic Speed +2 (no Move required). Nicky rolls against Guns (Pistol); -2 (distracted) +Basic Speed +2 (no Move required). Armstrong wins the Quick Contest and acts first. Armstrong takes a Ready manoeuvre to draw his .45-calibre Colt M1911A1 pistol (High-Tech, p. 98) with his right hand from a Bruce Nelson Summer Special inside-the-waistband leather holster worn on the left front, after his left hand draws away his shirt; -1 (undercover holster) (High-Tech, p. 154) to Fast-Draw (Pistol) skill. He succeeds, meaning he draws his pistol at this turn and can still perform a combat manoeuvre (p. B194). Armstrong grips his pistol with both hands and immediately assumes an Isoceles shooting stance (Tactical Shooting, pp. 11-12). This would ordinarily require another Ready manoeuvre, but Armstrong has the Grip Mastery (Pistol) perk (Tactical Shooting, p. 39), which allows him to do this as a free action. Armstrong carries his single-action pistol (High-Tech, p. 82) “cocked-and-locked” (Tactical Shooting, p. 8), and flipping off the safety is a free action for a familiar user (High-Tech, p. 80). Armstrong takes an All-Out-Attack (Determined) manoeuvre, executing a Mozambique Drill (Tactical Shooting, pp. 15-16) on Nicky; this plays out as a Ranged Rapid Strike (Tactical Shooting, p. 18) with two distinct attacks; first two two-handed sighted shots (Tactical Shooting, p. 13) as a double-tap (Tactical Shooting, p. 15) to the sternum; +1 (All-Out Attack) -6 (Ranged Rapid Strike) -2 (range) +0 (torso hit location) = -7 to Guns (Pistol). Armstrong needs to succeed by a margin of 3 to hit with both shots, which he does. The headshot is at +1 (All-Out Attack) -6 (Ranged Rapid Strike) -2 (range) -7 (skull hit location) = -14 to Guns (Pistol). Armstrong’s flawless execution of the drill suggests that he has the Quick-Shot (Pistol) and Targeted Attack (Pistol/Skull) techniques (Tactical Shooting, p. 45) to bring down the total penalties to -1 and -5, respectively. The execution without checking for effect (Tactical Shooting, p. 16) suggests that he also has the Trademark Move (Wizard of Moz) perk (Tactical Shooting, p. 41), which gives a further +1 to the attack rolls. Armstrong succeeds making both attacks and Nicky fails his Dodge rolls. Nicky takes six times 2d pi+ damage after penetration (average 55 points), four times alone from the skull hit (p. B399). He is knocked down and, with slightly higher than average damage rolls, at -5×HP or less and thus instantly dead. The End.

Do not feel intimidated by the plethora of rules quoted for just one second of combat. They are listed here just to show my work and illustrate the possibilities offered by the rules. It makes sense for the player who intends to shoot like this a lot to note down the basics of the Ranged Rapid Strike, perhaps even in shape of a Trademark Move. In play, all he has to do is plug in the actual range penalty and roll the dice!

Note how acting first in the Cascading Waits situation allows Armstrong to prevent Nicky from acting at all (Martial Arts, p. 108).

Armstrong acts as soon as Nicky’s attention is elsewhere. Up to that point, he is deliberately slow and cooperative. Note the revealing motion required by the left hand to get the left shirt end out of the way. Armstrong wears wax earplugs (High-Tech, p. 70), a wise precaution prior to unleashing a short-barrelled shotgun and a large-calibre pistol (Tactical Shooting, pp. 34-35), as well as surgical gloves to avoid fingerprints.

Immediately after gunning down Nicky, Armstrong ejects the magazine of his pistol, racks the slide to clear the chamber, squeezes the trigger to lower the hammer, and places the pistol on Nicky’s body. The unloading of the pistol has since been discussed a lot. Actor Zubiena stated in a Combat Handgun interview from 1986 that “since there were no fingerprints on the gun, as soon as I’d gotten rid of it there would no longer be any physical evidence to connect me with the crime … the reason I put the gun on his chest wasn’t for any tactical reason or as some kind of calling card, but because the director told me to.” That makes sense, but does not explain the unloading. Years later he stated that his intention was to prevent it from being used against him. However, the “unload, show clear, hammer down” sequence looks suspiciously like ingrained behaviour from endless repetition in IPSC training and matches ‒ one of those things that distinguishes IPSC from combat shooting (Tactical Shooting, p. 49). After ejecting the magazine and the chambered round, he would not have needed to lower the hammer. Intentional or accidental, the scene’s shooting shows perfect form.

While walking away, the hit man removes and ditches his gloves. Note that unlike in 1984, nowadays you can take fingerprints from inside a glove (GURPS Cops, p. 97), so dumping them on the scene is no longer good tradecraft for the aspiring assassin.

Of further note, but not discussed here in detail, is how he handles the Franchi SPAS 12 shotgun and Ruger AC-556F assault carbine in this episode. He holds both weapons with the off hand on top of the hand guard in order to better control muzzle rise when firing without stock (Tactical Shooting, p. 12). Doing so avoids the Rcl increase, but not the Acc penalty and ST increase.